Could You Describe the Ruckus, Sir?

Um, dude? "We trounced your asses" ? Are you f**king kidding me? 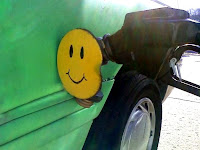 Some days are like that. This is one of them. Got up in the middle of the night (ok, 5:30 am, but it was dark) in order to make it on time to a breakfast meeting for a business group with which I have an affiliation.  As I am especially morning challenged I  did the sniff test on clothes at the top of the pile,  threw on some random items, and decided I was doing great when I left the house only 10 minutes later than planned. 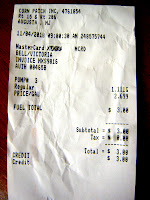 But it was raining, and dark, and my old van's headlights are so dim, and my night vision so poor,  I could barely find the road.  My semi-rural area is winding and hilly, streetlights are scarce and deer are plentiful.   I did 35mph for a few miles in a 50mph zone...... stayed on the road,  hit no deer and surely pissed off the guy behind me.   Then I noticed my fuel warning light was on- aw shit- I tried calculating how many miles I'd gone since it read "empty", and pulled into the only gas station for miles- an Exxon.  I have not bought gas at Exxon since the Valdez.  Ah, well.  Just this once.  I had no money and had to get $3.00 worth of gas- on a credit card.   But I made it to the meeting, more or less on time.
And it was ok.  Good, if fact.  Meetings aren't really my thing, but this one involves food, and ketchup, and coffee, and that surely helps.  There were some fun moments, some educational moments, some necessary housekeeping type moments and a manageable amount of socializing (for an introvert). 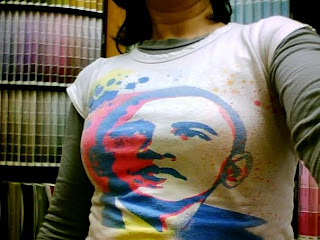 Until the end.  When, for reasons I'm not quite sure I  understand (though it may have something to do with my hamper-clothing),  I found myself cornered by someone who decided it was somehow important to let me know that "we trounced your asses" (in the recent mid-term election).
What?
Dude.
Really?
I don't even know how to respond to that.  "We trounced your asses" is not  a part of my vocabulary.
I can't even watch high school football games because I find the language of the folks in the stands to be unnecessarily violent and appalling.
To me this person's phrase was rude, unfriendly,  mean-spirited and uncalled for (and did I mention it was morning?).
In essence I was being told in an offensive, gloating, insulting way that this person believed I was a loser.  Because S/he "trounced" my "ass".  It was supposedly about politics- a subject in which I am well-informed- yet this person spoke in a way that most would reserve for a game of team beer-pong.  I suppose this person may have played some violent sport in high school and retained the unfortunate vocabulary. And I find it sad that bully language is so often used by politicians and celebrity political wannabes, but I was caught by surprise here because this group affiliation is made up of professionals and business owners, whom, presumably, are there to represent the service they provide and put their best foot forward.
I may wear hamper clothes, but I conduct myself in an appropriate manner and  behave respectfully toward others.
One thing I have learned- you can dress in expensive clothes, have all the "right" credentials and initials after your name- and still behave like an ass.
I am perfectly willing to concede that yes, one party received more votes than the other this time around.  The meaning of that and the reasons and the implications are far too complex to be summed up in a few paragraphs however, and certainly a gloating "We trounced your asses" trivializes the entire process and brings nothing useful to the discussion.
I ended up leaving the meeting feeling badly, wondering if this was acceptable behavior and something I was expected to endure.
The rain, the gas, the bully.

I suppose we will always have  bullies, even those dressed up in suits and ties, or wearing dresses and scarves.  But I personally have always preferred co-operative, rather than competitive, games.  So please, if you can't play nice, kindly pack up your marbles and go home.